While 5G Fixed Wireless Access (FWA) receives a new round of attention from the community - carriers, vendors, and analysts, the issues it will need to resolve are much older. Prior to 5G, fixed wireless has undergone at least two previous instantiations neither of which were ultimately successful. The 1st boom of innovative, largely OFDM-based startup ventures in 2000 all focused on the total cost of ownership and tried to develop complete systems solving product cost plus labor plus OA&M with technology alone.  The effort to develop a complete system from modem to antenna to software proved too big of a lift for any one company.

WiMAX came around 5 years later, and in its initial version was a 2nd Fixed Wireless Access solution, based on a standard spec this time, IEEE-802.16. Because it was based on a standard WiMAX had the advantage of having an ecosystem of vendors specializing in some specific part, or parts, of a complete system. With this approach, OEM companies could take best in breed portions to build their own products. This effort was destined to fail, as it too did not solve the core issues for residential fixed wireless, resulting in ROI numbers that were not palatable to either the carriers or their investors.

Fixed Wireless Access to the residential market is a hard problem to solve, witness the two previous attempts. To be successful FWA needs to meet two core needs.  First, FWA must be able to offer similar services in terms of speeds and application support when compared to wireline options.  Second this must be done at a comparable or better cost. Given that a wireless system inherently has more complex components than a cable modem system, that makes this a very difficult but not unsolvable problem. Carriers want to see a business plan that can deliver an ROI in less than two years, sometimes as fast as one year, and be able to do it at a price that competes with cable, DSL and/or fiber.

What are the challenges that need to be solved? 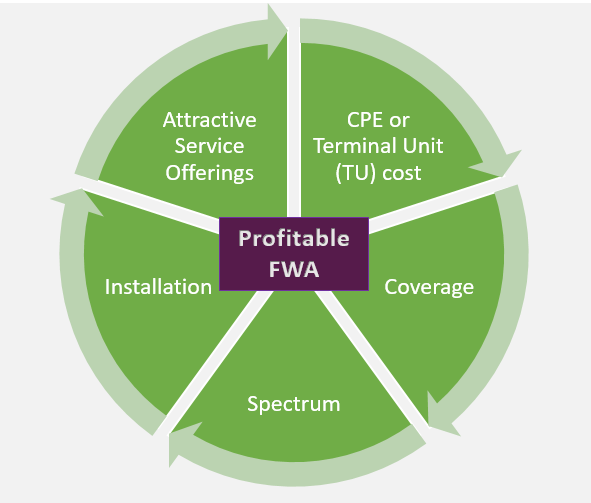 With the challenges clearly defined, the question to be answered: Can 5G FWA deliver?