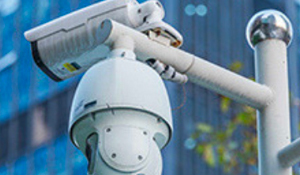 Don’t get caught with your network down: Video Surveillance using mmWave for connectivity will extend your Surveillance network quickly and on budget!

The primary end users for Video Security are municipalities, large venue operators, companies seeking to enhance parking lot video coverage or other open spaces to name a few. The driving demand is safety and whether it’s the government or private enterprise video surveillance is often the solution that is chosen. However, deploying a video security network is seldom done by the end user.

Rather system integrators, dealers and installers are employed to design and install networks capable of delivering reliable video surveillance connectivity. System Integrators are often involved in all phases of a such a network - selling, installing and maintaining the security system including the network itself. For the most part they are involved in other aspects of security not just the video surveillance element - access control and intrusion prevention are a few examples. System Integrators come in all sizes, global, national, regional and local. A large chunk are owner-run. The larger ones are public companies. There are also many types of consultants that are  security focused. They can be independent and focused solely on security. They can be regional, national and global. They may even be engineering companies focused on security and other verticals like Audio Video, fire safety and more.

Smart Cities are increasingly turning to video surveillance as a key method for enhancing safety and are deploying more cameras every year. These cameras are often HD 4K and PTZ requiring 10’s of Mbps of capacity. In addition the quality of the video is of paramount importance – no dropped frames, low latency and low jitter rates are demanded.

Historically sub 6GHz wireless systems have been used extensively as the wireless component of a video surveillance system. These networks were capable of supporting 100Mbps, which was ideal for standard resolution cameras, and in many cases HD as well.

There are two trends that are emerging that unfortunately preclude sub 6GHz systems from addressing the video surveillance connectivity market today and in the future. The first – interference. Sub 6GHz systems operate almost exclusively in the 5GHz WiFi bands, which are widely adopted and available everywhere.  Unfortunately Wi-Fi interference is growing fast and reality shows that when there is a crowded event where multiple devices such as WiFi Access Points are all competing for the same wireless frequency, sub-6 GHz wireless connectivity solutions cannot be counted on to deliver reliable video surveillance connectivity.

The second trend that is pushing sub 6GHz solutions aside is the increasing demand for higher resolutions (4K) faster frame rates (10 frames per second is typical) and full PTZ functionality. All of this means a standard 4K camera operating at 24fps can consume anywhere from 10Mbps up to 40Mbps per camera. If four cameras are deployed on a single pole or location, that could result in as much as 400 Mbps. A capacity demand that sub 6GHz cannot support.

Whether it is older sub 6GHz technology or more current higher capacity mmWave systems being considered, one of the primary concerns regarding the use of wireless for video surveillance connectivity is reliability. Many have only used fiber when deploying a video surveillance network. Fiber is fast, secure and meets all the requirements for video traffic. System Integrators want to recommend and deliver the best video surveillance connectivity solution to their customers, fast and on budget. While fiber meets the technical requirements, fiber is not ubiquitously available either across cities or corporate campuses. If fiber does not go where it is needed, this is here the right wireless network can step in and extend that reliable, secure fiber environment wirelessly.

It wasn’t too long ago that security professionals and end users were skeptical about installing a wireless video surveillance network when a traditional fiber network was not an option. For years, they have had only two options to transmit video: either fiber or traditional 5GHz wireless. Fiber’s speed and reliability are great, but the price tag, time and disruption of its installation aren’t. At the same time, using traditional sub-6 GHz wireless technology for video surveillance connectivity can provide an affordable and flexible solution, but with a host of problems, like unreliable connectivity, limited bandwidth, poor latency, and interference from other wireless networks.

However, like many solutions in the security market, technological advancements in wireless systems has put to rest these concerns, thanks to the introduction of a reliable, easy to install and cost conscious solution that is also highly secure – Fixed 5G mmWave Wireless.

Operating in the 60, 70/80 GHz uncongested bands Siklu’s mmWave solutions extend your video surveillance network where fiber is not available - on time and on budget. Furthermore, interface is not an issue in these bands today, nor is it likely to be a concern tomorrow. This is due to several factors, the first of which are the basic characteristics of mmWave signals themselves. By their very nature mmWave signals use very narrow beams meaning spatial separation of a foot or so can be enough to avoid self-interference for systems operating on the same frequency.

Second the bands being referred to here in this paper, 60, 70/80GHz have a total of 24GHz of spectrum available. Compare this to sub 6GHz systems that have at most 450MHz. With 24GHz to choose from mmWave systems also avoid interference with massive frequency diversity/selection.

Siklu radios can provide all the key elements you need for reliable video surveillance connectivity:

The Future of Video Surveillance Connectivity

While there is a huge amount of hype around the future of 5G and video surveillance connectivity, in reality this is happening today. Network congestion is one the toughest IT security challenges this decade, but it does not have to be the ‘new normal’. Siklu’s wide selection of radios including our palm-sized radio provides your video surveillance network uncongested, interference-free, wireless connectivity wherever a camera is needed. Over 200 smart cities are already benefiting from advanced Fixed 5G mmWave video surveillance connectivity powered by Siklu today and adoption is accelerating. With mmWave networks, you can forget about losing critical pieces of video that don’t get recorded, because of a jammed network or malicious intent. Thanks to its fiber quality and wireless flexibility, mmWave security networks are an ideal solution for delivering live streams for your video surveillance network, both easily and affordably. 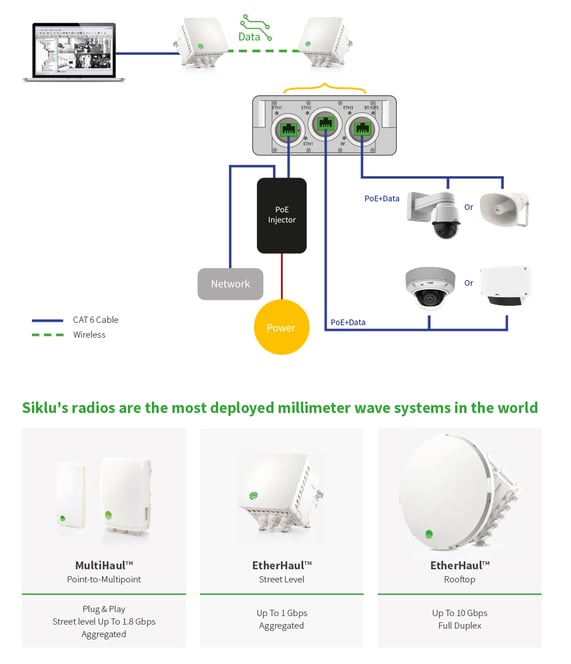