Boris Maysel
Aug 28, 2017
Wireline broadband service providers are under heavy pressure: First, 20% of Americans have cut their cable subscriptions to watch television on streaming services such as Netflix. These streaming services are much cheaper and the various retention efforts reduce their ARPU. Second, they lose hundreds of thousands of customers to cable operators that are now offering higher bandwidth and speeds, and the bandwidth demand is only going to grow.  Staying in the competition for wireline service providers will require additional investment in infrastructure – there is no way to avoid this.
Is your network ready to address these challenges? Can you respond quickly enough and beat the competition?


5G, with its promise to deliver Gigabit speeds is exactly the technology wireline service providers need to bypass old and costly DSL infrastructure. However, if you ask an expert about 5G Mobile Broadband, they’d say that it’s at least two to three years down the road. They’d be right — but that’s not what we’re talking about today. 5G Fixed Broadband Wireless, the kind that gets beamed to the home and provides speeds as fast as fiber, is not just ready for deployment — it’s already in use. Millimeter (mmWave) access is a proven technology that has been widely adopted by Regional Enterprise (and some residential) Service Providers. Here’s why you should adopt it as well.

Facebook and Google aren’t necessarily the companies you’d think of when you think of telecoms or ISPs.  Verizon, AT&T, and others are the large players in that market, with billions of dollars already invested in fiber, towers, and spectrum. By contrast, Facebook and Google are just dipping their toes in the water — as far as infrastructure is concerned, they have a lot of catching up to do. For this reason, Early 5G — based on free, unlicensed mmWave spectrum — has been extremely attractive for these Silicon Valley giants. Why? The reason is Time to Market. Using Fixed wireless 5G technology for the last few hundred yards of connectivity allows them, as newcomers, to rapidly and cost effectively develop a network that can deliver competitive services.

Faster and cheaper to deploy -The Hybrid Fiber and Wireless Network

Fiber is and should be the cornerstone of every high-performance network. Running fiber over the last mile from the backbone to residences, however, is a pricey proposition. Even Google — a deep-pocketed company by any measure — has admitted that its initial plans to run fiber directly to residences were too expensive to carry out. Hybrid Fiber and Wireless lets companies enjoy the best of both worlds. The fiber carries massive bandwidth to the neighborhood, while a 5G mmWave transmitter distributes Gigabit speeds it to the premise. 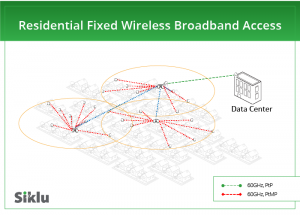 It’s all about the customer experience

The 60GHz band, also unlicensed, is wide and uncongested, perfect for providing high-capacity backhaul with no interference.

60GHz mmWave spectrum as well as free 5G is ready for deployment and broadband wireless is available for Gigabit to the home.

To meet the insatiable need for more and more bits per second in the world we live in, the wireless ecosystem turned to the only spectrum that is...