The fight for the future of 5G is here. The titans of industry — enormous Tier One operators like Verizon, and AT&T — have begun paying billions of dollars for the mmWave spectrum they need to lay the groundwork for 5G. The declarations about Early 5G intended for Fixed Wireless Access (Gigabit to the home - GTTH) puts the pressure on wireline and cable Internet Service Providers (ISPs). After all, if companies worth hundreds of billions of dollars are already fighting for their slice of the 5G mmWave spectrum, who else is going to be able to buy those licenses as well, right?

In the battle for 5G, the biggest telecoms with the most significant amount of mmWave spectrum will win out — or at least, so they believe. This has already led to battles and bidding wars, where companies that own spectrum are suddenly worth billions of dollars. This was the case with Straight Path, XO and FiberTower. As we’re about to point out, however, there’s no reason for service providers to focus only on licensed spectrum, especially when we discuss fixed access – unlicensed mmWave spectrum can do the job while providing 5G speeds and service levels right out of the gate.

After AT&T and Verizon acquired FiberTower and XO, then came the Straight Path battle. AT&T offered $1.6B — 150% of the company’s estimated worth, but then Verizon stepped in. Verizon, which had already spent $1.8B on XO, decided to invest even more with an offer of $3.1B that reflected more than 400% of Straight Path’s value.

With Verizon trying to crowd its large competitors out of the market, other service providers may feel as though they don’t have a chance. Who among them has a billion or more dollars to pony up for licensed spectrum?

For smaller services providers, there’s a stark lesson here. It is unlikely that a business case can be found for service providers that offer fixed only services, such as gigabit to the home, if they must justify buying mmWave spectrum for billions of dollars. The 28GHz band Verizon is securing is only relevant if the fixed wireless broadband service they sell is be part of a whole package that includes mobile internet as well.

Here are the current owners of the 28GHz band.

This is the first band equipment vendors will embrace in the mmWave space. 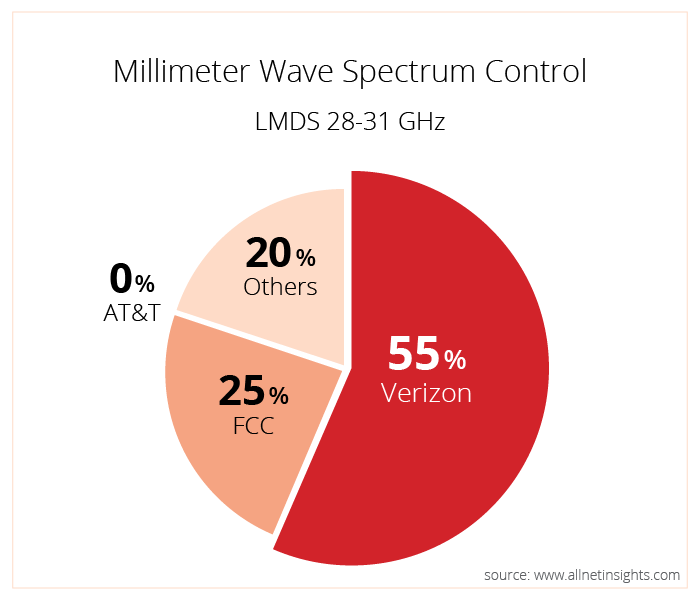 mmWave – More Essential than Ever for all Backhaul Requirements

Don’t want to be left behind? Stay updated and get all the news and updates first!